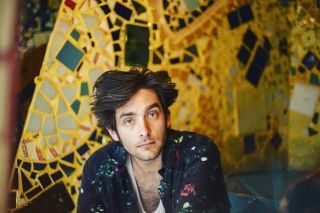 Since a child, Kirwin was in the home studio, recording Christmas tapes with his family, and grew up in the house of a musician. By age 8, he was writing counter melody arrangements in his head, with no knowledge of music theory. By age 12, songs were being written on an old Hondo electric guitar.

Finishing out teen years as bassist of many punk/rock/psychedelia/pop outfits in central Pennsylvania, Kirwin explored and embodied the power and joy of electric music. Rounding into twenties, Kirwin hustled as a touring musician, while also experimenting in theatre and schooling, until a near-death-experience. Sustaining many upper-body injuries, told he may never play an instrument again, Kirwin healed in record time with help and determination. Once back on the road, he was convinced that continuing to work in music was the light at the end of the tunnel that kept him alive.

“The art of music has given me much to live for.”

Twenty-six released songs into the “Tubey Frank” project many folks have contributed. The first live inversion and contributors to three EPs(Lost in the Woods, Euphoraphobia, Twomoreaphobia,) include brother Andrew Kirwin on guitar, and multi-instrumentalist/producer Adam “Stehreo” Stehr on drums. Later, Philadelphia bassist Erik Kramer joined the regular roster along with Melina Harris and drummer Adam Shumski. Jazz trumpeter Paul Giess later joined, resulting in the small EP release “The Quiet Fire”, the latest release December 2022 after having been recorded in early 2021. Earlier, the 12 song pandemic release “Quarantine Sketches” was recorded with contributions by Giess, Harris, percussionist Keaton Thandi, artists TheBandIvory, & A Day Without Love, American Trappist’s Joe Michellini, Pillow Princess’ Mattie Klauser, and Stehreo. On other occasions, rhythm brothers Josh and Ben Parry have, on many occasions, been known to supply drum & bass, when not working in various projects, including ska/punk outfit Catbite.

Another major project that involved Tubey Frank over the year 2020 was The Mouth House Sessions – a project that Kirwin and Kramer produced at Philadelphia’s Magic Gardens. While given an opportunity to use the space during the pandemic lockdown, Kirwin put together two concert films for various artists, as part of his yearly fundraising event.

Keep it real – audiences who enjoy emotive, lyrical songs of modern American situations and folklore are welcome to catch TF and listen anywhere music is streamed. 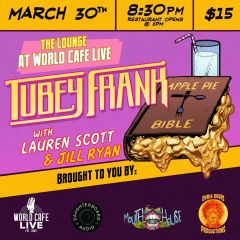