All shows in The Lounge are General Admission and seating is not guaranteed with ticket purchase. To make a reservation and guarantee a seat, click here or call 215-222-1400. The Lounge is a full-service restaurant & bar that opens at 6pm – check out our dinner menu here. 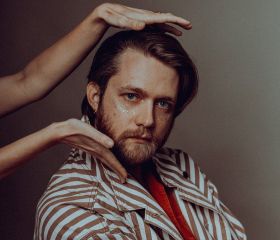 Taylor Ashton is a Canadian singer and songwriter living in Brooklyn. He spent the first half of his twenties on the road across Canada as frontman of the band Fish & Bird before moving to New York to work on a new set of songs and a new chapter of life. His music takes influence from the cosmic emotionality of Joni Mitchell, the sage vulnerability of Bill Withers, the humour and heartbreak of Randy Newman, and old-time and Celtic folk music. Alternately accompanying himself on clawhammer banjo and electric guitar, Taylor croons poignantly clever lyrical insights while effortlessly gliding between a Bill Callahan-esque baritone to a Thom Yorke-like falsetto.

His full-length debut album “The Romantic” was released in early 2020, followed by a companion EP “Romanticize” featuring remixes, reimaginings, and new songs. His songwriting appears on albums by Watkins Family Hour, the Brother Brothers, Benjamin Lazar Davis and others, and he has released singles with Aoife O’Donovan, The Fretless, and Aerialists, as well as a moody acoustic duo record in 2018 with songwriter & guitarist Courtney Hartman. Much is in store for 2022, including at least one new album and more fruitful collaborations. 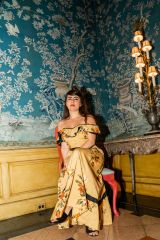 Kat Wright, whose voice is both sultry and dynamic, delicate yet powerful; gritty but highly emotive and nuanced, has been described as “a young Bonnie Raitt meets Amy Winehouse”. Add to that voice enough stage presence to tame lions, and the combination of feline femininity proves immediately enchanting. There’s soul flowing in and out of her rock ‘n’ roll with a serpentine seduction. Some of soul music’s sweet, grand dames belt, shout, seethe, and succumb, while Wright sings gently like a heartache’s apology. It’s funky in spots and beautiful all over. And it hurts a little … like it should.