Philly Undercover
It’s not a cover band, it’s not a tribute band… it’s Philly Undercover! We’ve asked some of our favorite Philly artists to pay homage to their favorite artists for this series. You may not recognize these local acts as they take the stage playing full sets in their best musical disguise for one night only. 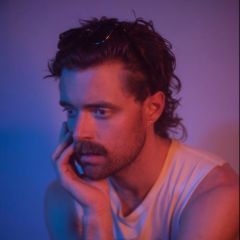 Dominy is a five piece indie band based in Philadelphia. Formed in 2016 by frontman and guitarist John Dominy along with his brother and key player Alex Dominy, the band’s current line up included Zak Ianitelli on drums, Brandon Porter on bass, and Turquoise Cobb on vocals and percussion. Dominy’s debut 2017 album ‘Wet Leather’ received praise for its authentic throwback 70’s rock sound, combining the swagger and attitude of bands like the Velvet Underground and The Rolling Stones with a healthy dose of classic country and Americana stylings. The band continued to tour and developed a reputation for its rowdy and irreverent stage shows, and landed open spots with nationally touring acts including Orville Peck and Los Bandoleros. The band released a follow up EP ‘Dry Pleather’ in July of 2017, along with another full length ‘Drugstore Cowboy’ in May of 2018.

Like all musical acts, the 2020 pandemic threw an enormous monkey wrench in the band’s trajectory. Forced to take a break from tour, Dominy turned inward and began work on their upcoming record, ‘Titans of True Love’. Representing a departure from the band’s earlier raw sound, this upcoming self produced record features sprawling soundscapes and lush, and at times, orchestral arrangements. Their new single, ‘Here or L.A.’ is the second single to be released off this upcoming record, and is a bridge between Dominy’s earlier, grittier sound and the newer, refined sonic palette of ‘Titans of True Love’. The band is currently shaking off the pandemic dust, and hitting the road ahead of the release of their new recorde, which is slated for release in late winter 2023.