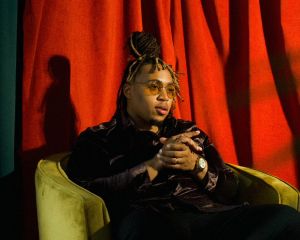 Jamison Ross is a GRAMMY-nominated Soul artist whose music emanates from the intersection of R&B, gospel, and blues supported by modern production –contemporary Soul. Jamison’s most recent project is his first Affective Music release and is influenced by some of history’s greatest Soul singers, including Marvin Gaye, Rance Allen, and Al Green. A native of Jacksonville, FL, Jamison honed his talent studying at Douglas Anderson School of the Arts, before attending Florida State University and then on to University of New Orleans, where he earned a Master of Music. Shortly after graduating, Jamison released his debut album, Jamison (2015), earning his first GRAMMY nomination. In 2019, Jamison and business partner, David S. Hargrett founded Affective Music, a Soul music-focused record label and management company dedicated to defining the sound of Soul for this era. Later that year, the label released Mykal Kilgore’s debut single, Let Me Go, produced by Jamison, earning his second GRAMMY nomination. Jamison’s unique ability to marry smooth vocal melodies with soulful production is sure to take audiences on a listening experience like never before. In the current state of music, Jamison Ross is a refreshing treat to true music lovers.

V. Shayne Frederick is a vocalist, pianist, and composer, with performances spanning decades. He’s electrified TEDx, NPR, and countless stages. The Philadelphia Inquirer notes his “silken baritone and elegant charm,” Metro Philadelphia salutes him as an “elastic vocalist,” while WXPN notes “his stunning baritone effortlessly soars,” and All About Jazz suggests he’s “one to watch […] a shining light.” DownBeat simply declared him “soulful.” Shayne’s fifth recording, The King Suite, has gained international media attention. His vocals have also been featured on Ropeadope Records (Paul Giess’ “Hymns Volume 1”) and Outside In Music (Nicholas Krolak’s “Voice = Power”). He is keyboardist, composer and vocalist for Yolanda Wisher and the Afroeaters, a Board Governor of the Philadelphia Chapter of the Recording Academy, and on faculty at The University of the Arts.