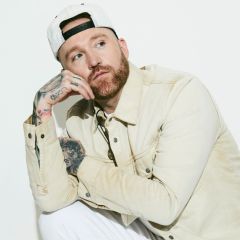 Forest Blakk wants you to experience his chaos. The Canadian singer-songwriter is ready to share the deepest parts of himself and challenge his audiences to do the same. He describes it as urban folk, mixing the tranquility and peace of folk music with the chaos and pulse of the city. Says Blakk about chaos: “It’s like a hurricane passing over you and it’s destructive and it’s challenging and it tests every part of your soul. But then the eye of the storm rolls in, and it’s the most beautiful and tranquil state.” In order to create his expansive, emotional and goose bump-inducing songs, Blakk stands in the eye of his own storm, drawing on raw emotion and his need to connect. “When you get an audience to sing back to you, it becomes a conversation,” Blakk says. “It’s the most beautiful part.” Everything started when Blakk’s grandmother gave him his first guitar at the age of 15. With his father in prison, he’d been living on the street. She took him in. While Blakk said he’s sure his grandmother wanted him to be a doctor or a lawyer, it was the guitar that would ultimately stick. “It was almost like a key to a lock I didn’t know I had,” he recalls. “When I opened the lock, I sang. And when I sang, that was it.” From those first moments with the music that would eventually become his life, Blakk continued to develop and grow as an artist. He found considerable success with his previous band, earning a Juno nomination and playing for audiences of thousands. But it never quite felt right, or finished. “For the first part of my career, I didn’t really understand what it was I was trying to do,” Blakk said. “Now, there’s more of a purpose to it. I’m starting to understand my own truths.” Enter Forest Blakk, a new name to match his self-discovery. “It’s always been me,” Blakk says. “Forest Blakk is who I’ve always been.” Walking through the Black Forest while on tour in Germany — inspiration for his pseudonym — Blakk said he was captivated by how the forest could be both haunting and beautiful. It’s a feeling he’s tried to work into his music. Blakk’s first single, “Love Me,” has been turning heads everywhere it’s travelled with its big sound and raw, pleading vocals. “It’s my version of truth,” Blakk says. His truth is music that is at once vast and intensely intimate. Combine the stadium-filling sound and lyrical prowess of Hozier with the delicate melodies of Vance Joy and the emotion of Sam Smith. It’s a soundscape that encompasses and caresses with haunting melodies, powerful percussion and intricate guitar. Above all, it is Forest Blakk’s honesty that rings out through the music and, he hopes, into the hearts of his audiences. “You can’t lie on stage,” he says “And I want them [his audience] to feel the truth,” Blakk says. “I want to evoke those raw emotions. I want them to feel empathy. I want them to feel everything with me.” – Erika M. Stark

For Nashville-based singer/songwriter Peter Raffoul, songs often emerge late into the night, at an hour when inhibitions fall away and the most essential truths are laid bare. With a lyrical sensibility that merges intimate confession and boldly detailed storytelling, the Canada-born artist opens up about anxiety and isolation and the more complicated aspects of human connection, elegantly matching his moody intensity with a mercurial form of alt-rock/folk. Made with producers Owen Lewis (Old Sea Brigade, Maddie Medley) and Henry Brill (Phantogram, Jack Garratt), Raffoul’s Songs From House In Blue reveals his undeniable gift for transforming pain into beauty—an element endlessly magnified by the pure warmth and power of his voice.

Originally from the small Ontario town of Leamington, Raffoul first embraced his stream-of-consciousness approach to songwriting in his late teens, when he spent countless hours teasing out songs in the clubhouse-like shed behind his family’s home. As the product of a highly musical family—his father Jody has played in rock bands for over three decades, his brother Billy is singer/songwriter signed to Interscope—Raffoul grew up immersed in the timeless records of the Beatles and Led Zeppelin and began exploring his own musicality by taking up piano at 17. “The music I’m making today really comes from all that time I spent in the shed over the years,” notes Raffoul, now 25. “It was always a world away from everything, where I could mess around with songs on this little keyboard and figure out how to put chords and melodies to all the lyrics I had in my head.” Before long, he’d added guitar to his repertoire and created a song called “Maybe I Do,” a bittersweet but radiant track on Songs From House In Blue . “I was trying to paint a picture of the start of a relationship where the other person seems so perfect, you’re almost waiting for something to go wrong,” says Raffoul. “It felt melancholy and hopeful at the same time, and once I found that contrast I knew I wanted to keep writing more songs in that vein.”

All throughout the EP, Raffoul builds a hypnotic tension between that raw emotionality and a wildly unpredictable sound informed by everything from late-’80s college rock to left-of-center hip-hop to the Beatles’ excursions into dreamy psychedelia. Among the EP’s standout tracks are his debut single “Fucked Up Together”: a gorgeously stripped-back piece centered on his delicate piano work, soulful vocals, and lyrics that speak to a deep longing to be understood. On “cigarette holes,” he spins a piercingly honest portrait of emotional chaos, upending the song’s heavy-hearted mood with brightly uptempo rhythms. Meanwhile, “Bad for Me” brings potent beats and prismatic textures to an unflinching meditation on cycles of self-destruction. “When you’re going through a breakup or any other hard time in life, sometimes it feels easier to do things that are bad for you, as a way to numb yourself,” says Raffoul, who co-wrote “Bad for Me” with Connor Thuotte and Kate York (Lady A, Caitlyn Smith). “We started riffing on that idea and Connor played a very simple chord progression on this junky little guitar he’d gotten for $5 at a yard sale, which we used on the final version—it was this magical moment where everything just came together so naturally.”

True to the playful spontaneity and DIY spirit of its creation, Raffoul’s debut EP offers up plenty of idiosyncratic moments that intensify the unbridled energy of each track. To that end, the chorus to the gloriously frenetic “I Just Want to Be Ok” takes the form of a cathartic outburst, a component he improvised in co-writing the song with his brother. And on “Call Me,” Raffoul shares an epic heart-on-sleeve ballad threaded with hauntingly stark and spellbinding piano melodies. “I wrote that song late at night in a hotel room and made a demo where the piano sounded super-thin, almost like it was playing through a truck driver’s transistor radio,” he recalls. “When we worked on it in the studio, we ended up manipulating the piano sound so that you can still really feel that loneliness of the original, which is one of the things that makes that song so special to me.”

With the release of his first batch of material, Raffoul hopes that others might find solace in his unfiltered yet finely crafted outpouring. “Most of these songs are about admitting that things are far from perfect, but to me there’s hopefulness in that,” he says. “I think it’s possible to find comfort in being uncomfortable, as long as you know you’re not the only one who doesn’t have it all figured it out. I want to let people that it’s okay to be happy and sad at the same time—and that instead of trying to ignore those uncomfortable feelings, we should try to make the most of them.”