Charlie Winston: As I Am

Charlie Winston Gleave (born 14 September 1978), better known as Charlie Winston, is an English singer-songwriter based in London. Winston has so far had his most significant commercial success in France. Charlie played bass guitar for his brother Tom Baxter, appearing on Baxter’s Feather and Stone album. As well as touring with Tom, much of Charlie’s early career saw him composing music for, and performing in, London-based contemporary theatre productions. His first ever unreleased and rarest record was Mischifus, a mix between beatbox, guitar and piano, which appeared as a theater/dance production that he had performed on stage in 2007 recorded under the Real World label. 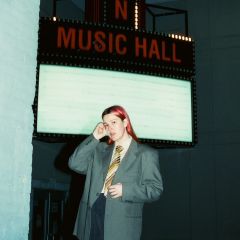 Montréal-based singer-songwriter Gabrielle Shonk shares “How We Used To Be”, her first new music in five years. After parting ways with the major label behind her debut album, Shonk used her newfound creative freedom to collaborate with longtime friends, co-writer Jessy Caron of the band Men I Trust, and producer Jesse Mac Cormack (Helena Deland). The result is a moody single with tinges of 90s R&B exploring romantic nostalgia by reminiscing about a relation ship before it fell apart. “How We Used To Be” is a love ballad about “a relationship that was hard to leave,” explains the JUNO-nominated singer. Delicate piano lines and softly-strummed acoustic guitar accompany Shonk’s dreamy vocals recalling a time in a relationship before it turned toxic.“I hate you, I love you, I miss you,” Shonk laments before the soulful chorus reflects on better times.