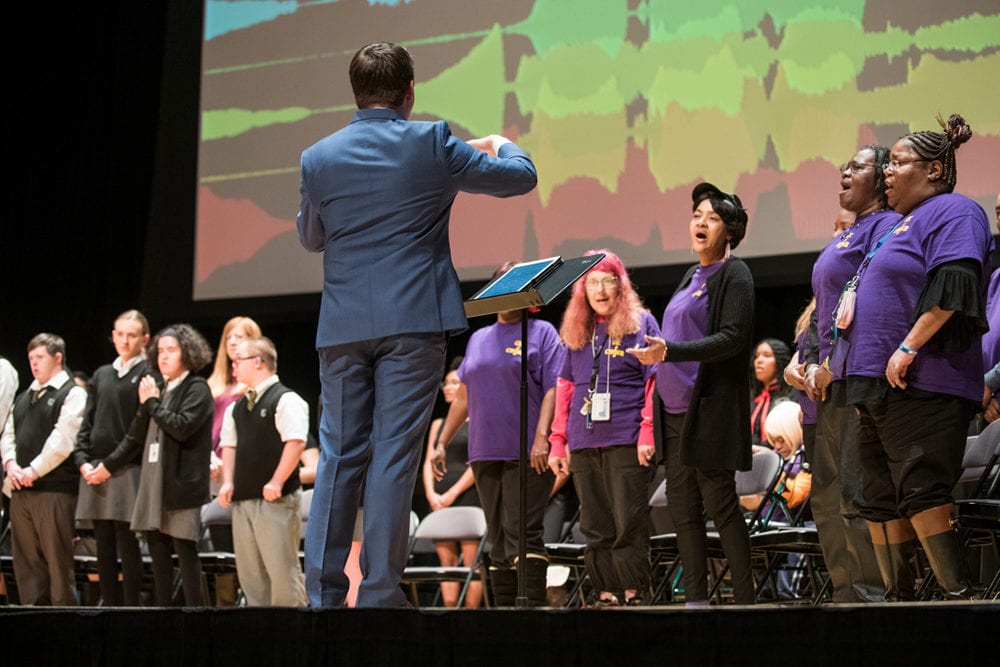 A Song Everyone Can Sing

In celebration of LiveConnections’ 10th Anniversary, we have been dreaming big about accessibility and inclusion in our city. In 2017, we launched a two-year singing extravaganza where EVERYONE could participate in making music together. Young and old. People of diverse abilities and backgrounds. People who love to sing and people who don’t think they can sing at all.

What is a Song? Who is Everyone? What does it mean to Sing?

Beginning in the fall of 2017, we hosted workshops with Paul Smith on the “VOCES8 Method.” Co-founder of the renowned British a cappella group VOCES8, Smith developed the Method to tie rhythm and sound to neurological development. Public school teachers and students, teens with intellectual disabilities, and adults receiving therapeutic services had opportunities to sing and move to a range of music from folk and popular styles.

In the spring of 2018, three partner choirs joined VOCES8 on stage for a LiveConnections Presents concert. 60 youth and adults from Germantown Recovery Community, C.W. Henry School and Our Lady of Confidence Day School performed with VOCES8 for a sold-out crowd at World Cafe Live.

In year two of the initiative (2018-2019), we took the ideas even further, commissioning a new multi-media choral work that invited people with diverse abilities to participate through singing, movement and visuals.
It was an enormous, collaborative process, led by LiveConnections concert curator Mary Javian.

Four partner choirs — Merakey, Northeast High School, Our Lady of Confidence Day School and Overbrook School for the Blind — collaborated with the artists in a series of generative workshops that embedded participants’ voices and experiences in the finished piece.

At our culminating Community Sing in March 2019, VOCES8 returned and joined the partner choirs in presenting the world premiere of the multi-faceted new work.

The whole audience was invited to join in the music-making, celebrating human ability and the joy of singing together.

Jay Fluellen, composer, is a Philadelphia-born musician known as a composer, college professor, educator, accompanist, pianist, singer, and organist/choir director. He is currently a teacher with the School District of Philadelphia at Northeast High School and an organist and choir director at the historic African Episcopal Church of St. Thomas. Performances: on January 14th, 2017, Fluellen accompanied Valerie Gay in three original compositions and three arrangements of music by Hannibal Lokumbe, on March 8th, 2017 his choral composition “O Send Out Thy Light” was performed by Philadelphia All City Choir at the Kimmel Center under the direction of Dorina Morrow, on March 19th, 2017 his Jazz Magnificat and Nunc Dimmitis was performed by the Philadelphia Cathedral Singers under the direction of Thomas Lloyd, and on April 8th, 2017 his commissioned work for the Germantown Poetry Project, Jan Krzywicki conductor, Linda Reichert artistic director, received its premiere, on November 8th, 2017 his commissioned music for the production Walk In My Shoes, Teya Sepunick; director, received its premiere.

Daniel Simpson, poet. In 2017, Daniel Simpson and his wife, Ona Gritz, collaborated on two books. Finishing Line Press published a volume of their work entitled Border Songs: A Conversation in Poems last September. This January, Diode Editions released More Challenges for the Delusional: Peter Murphy’s Prompts and the Writing They Inspired, an anthology of prose and poetry, which Dan and Ona co-edited. Daniel Simpson’s collection of poems, School for the Blind, was published in 2014 by Poets Wear Prada. His work has appeared in Prairie Schooner, The Cortland Review, Beauty Is A Verb: The New Poetry of Disability, The New York Times, and elsewhere. The recipient of a Fellowship in Literature from the Pennsylvania Council on the Arts, he served, along with Ona Gritz, as Poetry Editor for Referential Magazine, an online literary journal, from 2013 to 2016. His blog, Inside the Invisible, can be found at www.insidetheinvisible.wordpress.com.

Shavon Norris, movement artist, is an artist, educator and facilitator. As a dance maker, Norris’ work has been presented at Manhattanville College, The Philadelphia Live Arts and Fringe Festival, Temple University, The National Constitution Center, Art Sanctuary, Chester Eastside Ministries, the CEC, and at Joyce Soho.

Paul Smith is an innovative and creative performer, conductor, composer, an inspirational educator and an empowering public speaker. As co-founder of VOCES8, author of The VOCES8 Method and CEO of the VCM Foundation, he has enjoyed more than a decade of work globally in prestigious concert venues, festivals, schools and universities.

VOCES8. The British vocal ensemble VOCES8 is proud to inspire people through music and share the joy of singing. Touring globally, the group performs an extensive repertory both in its a capella concerts and in collaborations with leading orchestras, conductors and soloists. Versatility and a celebration of diverse musical expression are central to the ensemble’s performance and education ethos. VOCES8 is passionate about music education and is the flagship ensemble of the music charity VCM Foundation. Engaging in a broad range of outreach work that reaches up to 40,000 people a year, the group runs an annual program of workshops and masterclasses at the Foundation’s home in London, the Gresham Centre at St Anne & St Agnes Church. Dedicated to supporting promising young singers, the group awards eight annual choral scholarships through the VOCES8 Scholars initiative. These scholarships are linked to the annual Milton Abbey Summer School at which amateur singers of all ages are invited to work and perform with VOCES8. The ensemble is proud to be the Associate Ensemble for Cambridge University and delivers a Masters program in choral studies.

As official Ambassadors for Edition Peters, the ensemble publishes educational material including the ‘VOCES8 Method’. Developed by Paul Smith, co-founder of VOCES8, this renowned and unique teaching tool is available in four languages and adopts music to enhance development in numeracy, literacy and linguistics. Also available are two anthologies of its arrangements, and an ever-expanding ‘VOCES8 Singles’ range. Learn more at voces8.com

Art-Reach has grown into a connector, leader, and advocate for accessible cultural opportunities for people with disabilities and communities facing economic adversity. Art-Reach leverages its position between human service and cultural sectors to create social change and increase cultural opportunities to people who are typically under-considered by the cultural sector. Art-Reach is working toward cultural accessibility on a scale that includes over 425 organizations, creating over 160,000 interactions each year between underserved audiences and the arts. Over the last three years, their programmatic impact has increased by more than 1000% – from 13,000 people using their programs to over 160,000 in 2017.

Mary Javian. Mary’s goal as an artist is to use music to create positive social change in communities. She works towards that goal as a performer, educator, curator and public speaker and has had the privilege of presenting around the world in those areas for nearly two decades. Mary has toured and performed with the Philadelphia Orchestra and other world-class ensembles as a double bassist. She has served as principal bassist of the IRIS Orchestra in Memphis, Tennessee and has recorded with the Philadelphia Orchestra, IRIS Orchestra, the Tanglewood Music Center, Network for New Music and the Apple Hill Center for Chamber Music. As a soloist, she has performed recitals and given masterclasses in the US, Europe and Asia. Mary is on the faculty at the world-renowned Curtis Institute of Music where she serves as Chair of Career Studies, and on the faculty of the prestigious Verbier Festival in Switzerland. She has created a dynamic social entrepreneurship curriculum that develops the entrepreneurial and advocacy skills necessary for 21st century musicians. A graduate of the Curtis Institute of Music, Mary studied with Harold Robinson, principal bassist of the Philadelphia Orchestra. She received fellowships from the National Symphony, the Tanglewood Music Center, the National Repertory Orchestra and the Verbier Festival.

Program
Check out the full program from the March 10th concert.

Score
Take a look at the canon score for A Song Everyone Can Sing, featured at the end of the program.

Project-specific support has been provided by the Dolfinger-McMahon Foundation, Musical Fund Society, Presser Foundation and an anonymous donor.

‘A Song Everyone Can Sing:’ Celebrating 10 Years with LiveConnections – For the last decade, LiveConnections has been on a mission to inspire learning and build community through music-making in Philadelphia. In residence at World Café Live, this local nonprofit has reached over 38,000 participants…

A Song Everyone Can Sing with LiveConnections at Temple University – Everyone can participate in making music together during the special March 2019 event: young and old, people of diverse abilities and backgrounds, people who love to sing and people who don’t think they can sing at all. In celebration…

Press Release – In celebration of LiveConnections’ 10th anniversary season, the organization is dreaming big about accessibility and inclusion in Philadelphia. They’re creating a multimedia music extravaganza where everyone can participate in making music together. The Community Sing, which…